OK. OK. OK. This is the greatest festival know to man! Reason number 425,987 why I love Japan so much. Konaki "Crying" Sumo or Nakizumo "Sumo of Tears" is a Japanese baby crying festival. Seriously. It's pretty much a contest where it pays to be a crybaby. 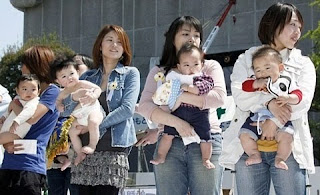 Dozens upon dozens of mothers line up, infants in arms, to enter this crazy competition. Two sumo wrestlers, each holding an infant, face off on stage in front of hundreds of onlookers to see whose baby cries first. A Japanese priest presiding over the contest "assists" by screaming, waving at, and generally trying to scare the crap out of the babies. Whichever baby begins wailing first wins. If both start to cry at the same time they have to duke it out to see who cries the loudest to determine the winner.

I know, I know. Is it really horrible that, as a mother, I find this hilarious?Where else in the world will hundreds gather to watch grown men scream at and scared babies?! 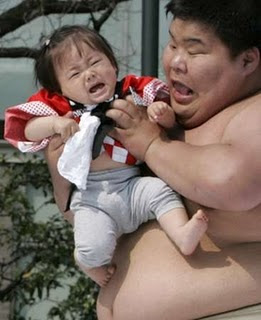 But the Japanese have their reasons. It may seem totally bizarre and outrageous to most people, but this contest has a long history. Steeped in tradition, the festival is over 400 years old and takes place annually at a few of Japans most well-known temples.
The idea behind the competition comes from an old Japanese proverb "Naku ko wa sodatsu" that says "Crying babies grow fast" and the louder the child cries, the more the gods are thought to have blessed them with good health. Konaki Sumo is an opportunity to pray for the babies health. 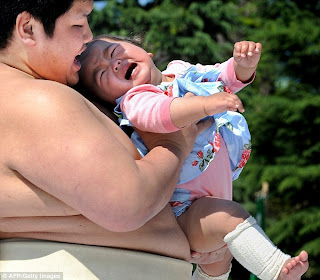 Contestants must be under the age of one so I missed my chance with Charlotte. Oh well, next one.